We’ve been overdue for an October themed outfit, not so much because we couldn’t think of anything. Actually, our dog Molly has been preparing for this since she’s been growing out her hair since February. We’ve had our October themed outfit planned several months back, but this time we had the whole family in mind. We’ve been excited for this day and I would spend days thinking about how I would construct the costumes (sadly yes, this is what goes on in my head during my downtime).

Let me first post a throwback from last year:

Last year’s costume was relatively easy as we already had our existing costumes and only needed to add baby Kyla’s outfit.  And when I say “relatively easy” it’s because of this: This year, I have to think of how to make each one of our costumes, while also including the dogs. So, the theme is Wizard of Oz! We still have to finish making tinman costume, but so far,  here it is:

And when I say “formerly known as Chewy”, this is Chewy before:

Introducing our lion who was, and probably still is (in real life) searching for courage, Molly:

Molly’s hair was trimmed to have a lion’s mane and tail exclusively for this occasion. Her ears go well to add to the lion look.

Next, is Tinman, whose costume is incomplete and whose role will be played by daddy Lawrence (not by me as pictured): 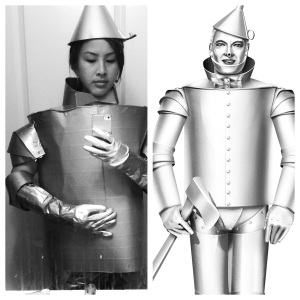 Originally, I was thinking of making Tinman’s costume out of silver pleather, but when I went to Joann’s fabric store, someone else had Tinman’s costume in mind and bought all the silver pleather! Luckily, this prompted me to walk around the store, where I came up with the alternate idea of making the costume out of duct tape and poster board. The gloves were dishwashing gloves sprayed silver and the hat, well, it was a funnel. Duct tape + poster board >>> Silver pleather.

The next character is played by yours truly…me! Scarecrow’s costume was homemade with the exception of the $1 brown sweatpants I found at the thrift store. Oh and the boots? They were Lawrence’s. He didn’t know I used them (and stuffed hay in them) for this picture. 🙂

Finally, the leading lady, Kyla, who will be Dorothy for Halloween this year: 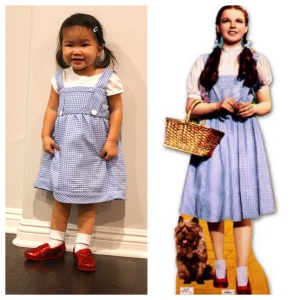 Kyla’s Dorothy dress was home made and her shoes are Tom’s! I tried to make her dress as close to the original as possible with the criss cross patterns at the seams and with correct button placement and all.

We have yet to have a family/cast photo with all of us in it together. I’m still finishing up Lawrence’s tinman costume, but stay tuned! Hopefully everyone will cooperate and/or some sort of photo voodoo magic will work so that all the characters can come together as one and skip down the yellow brick road!